The future of the luggage tag

Some day the identification of pieces of luggage will be more sophisticated than a printed barcode on a piece of paper. And even today the future is sometimes already hidden inside the luggage tag in the form a a chip with an antenna.

Ye olde Apple keyboard (and the new one) 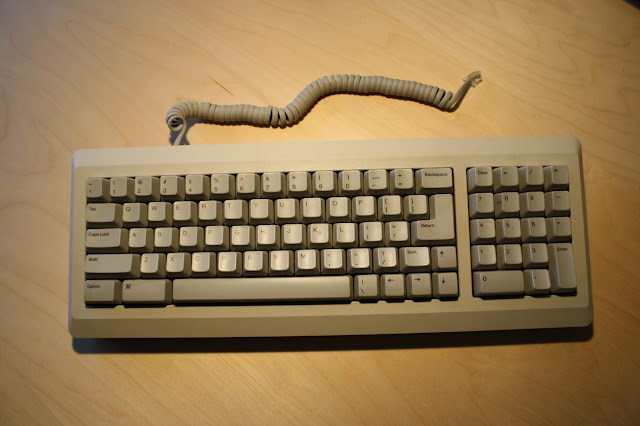 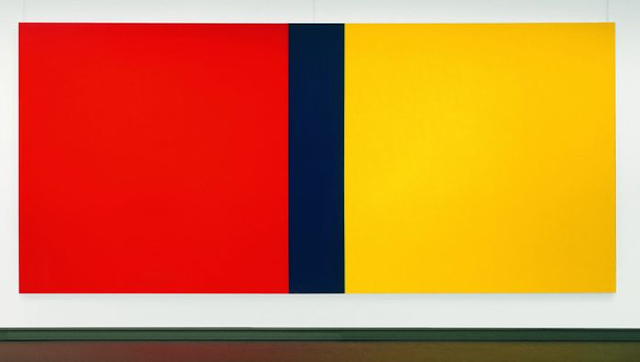 and Who of Pink and Green? 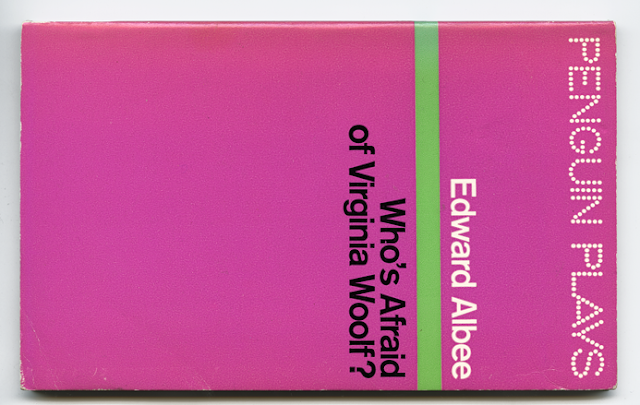 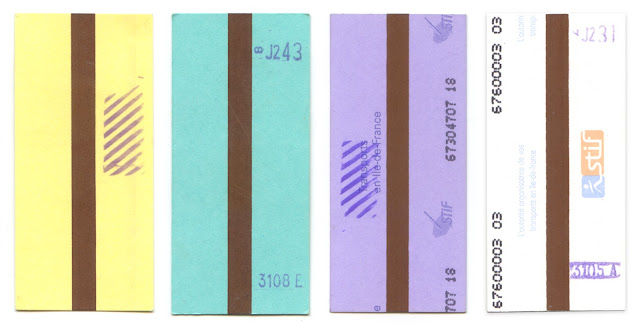 On July 19th 1900 the first line of the Paris métro was opened (almost three decades after the first line of the London Underground), and from the '20 on an extensive network would unite most of Paris and Parisians with each other. Millions and millions travelled everyday, leaving no trace, except for the occasional ticket left at the exit. And while the world above saw many changes – Le Corbusier, the second World War, Brigitte Bardot – underground everything stayed pretty much the same. Maybe the biggest change was in 1973, when human ticket punchers, the 'poinçonneurs' at the entrance were replaced by automatic turnstiles, operated by the new metro ticket with a magnetic strip. This ticket, yellow, with a brown band in the middle, would become the iconic image for the metro, as can be seen in some publicity campains that eventually made it to the museum (of publicity). 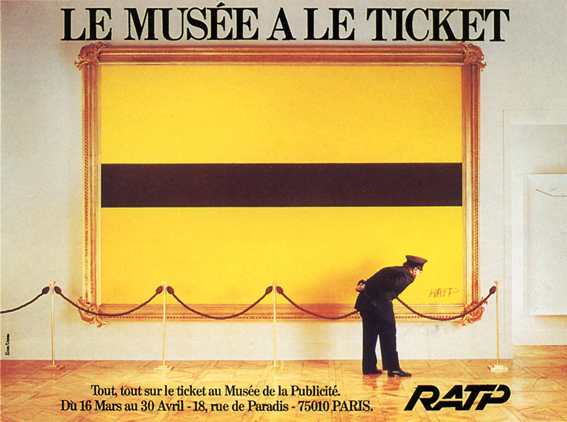 Then, after nearly two decades, the company that operates the metro (the RATP), decided to change the color of the ticket changed to jade (a kind of green) as part of a new visual identity. Most of these details are to be found in a very informative book with the title Petit histoire du ticket de métro parisien by Gregoire Thonnat, but even this expert on the subject doesn't tell why the ticket color changed again to an (equally nice) purple 11 year later, only lose nearly all color in 2007. This last version of the metro ticket is used for someshirt1202, with some reinforcement of the sparse presence of the colour orange by adding a few weekly tickets. 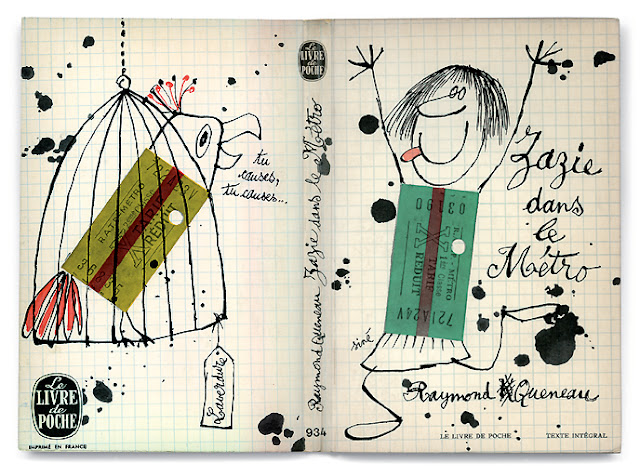 Some things you do make you feel proud, some things make you feel humble. Other things make you feel both. We were very pleased with our idea of using used Parisian métro tickets for someshirt 1202, only to discover that someone else had already applied this motif on a garment, and a long time ago too. In 1956 the French cartoonist Siné made this funny and beautiful cover for the Livre de Poche edition of Raymond Queneau's equally funny and brilliant novel Zazie dans le Métro, on which he gave the metro obsessed Zazie an appropriate dress. And for reasons unknown gave it to the parrot Laverdure ("Talk, talk, that's all you can do") as well...
Geen opmerkingen: 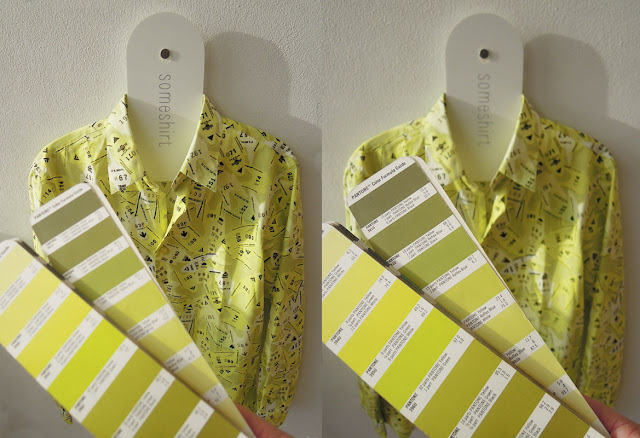 Great as computers are in communication, they are seriously flawed in one area: colour fidelity. How do you know, for example, what kind of yellowish green is someshirt 1201 exactly? The truth is, you don't know. Not exactly. Even if a photo of this shirt looks right on our screen, there is no guarantee it will be the same on your screen. So much depends factors like the type of display, the program you are using, the lighting conditions in your room, the viewing angle and so on. Fortunately, there is something like a universal language of colour: the Pantone color system. So if you are in the possession of a Pantone color selector, look at the pages that show the colours PMS 393U-399U and 581U-587U, and you will have a pretty good idea of the range of greens in someshirt 1201!
Geen opmerkingen: 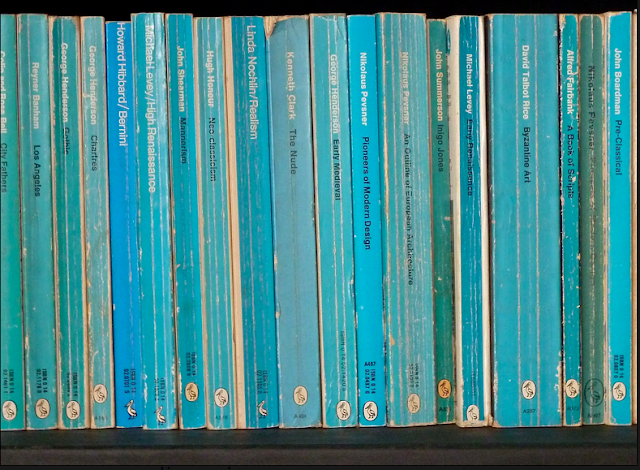 "In those days, paperbacks came in their traditional liveries: orange Penguins for fiction, blue Pelicans for non-fiction. To have more blue than orange on your shelf was proof of seriousness."(Julian Barnes, 'The Sense of an Ending', 2012) 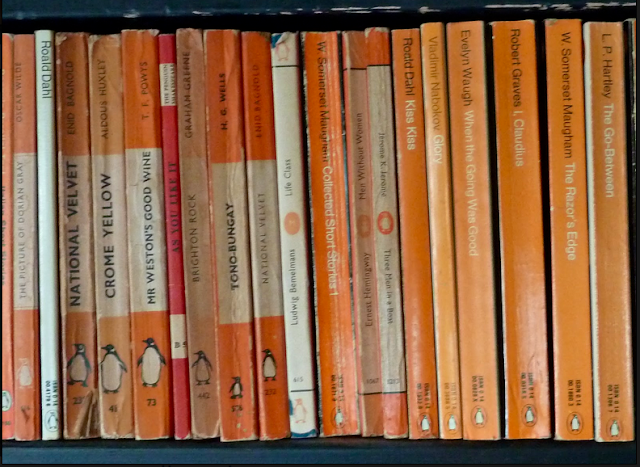